I played football in high school so I am used to competing with my friends in team sports,  but I never really liked the pressure of competing at such an extremely competitive level. I always enjoyed sports that were more low-key and causal. So, when I received an email from Loyola Marymount about an intramural kickball league, I was very excited. The challenge was convincing my friends why they should join my newly created intramural kickball team. Here was my pitch: when was the last time you played kickball, fifth grade? How much fun would it be to play in a sport where there is literally no pressure? Also, how can someone even be bad at kickball? It worked. I was able to get all of my friends on my dorm floor to join my team.

So I gathered up all of the money we needed for our deposit ($60) and went to the sign up meeting as our representative team captain. I noticed that the people running the league took things seriously and really tried hard to organize everything, which I really appreciated. We went ahead and signed up in the MW league, meaning we play our games on Mondays and Wednesdays. Before you know it, we were putting people in positions, setting our batting order, and coming up with strategies. More people on our dorm caught wind of our newly formed team and asked to join. So needless to say, we had a pretty deep roster. We would all text each other excitedly leading up to the day of the first game, as we made sure we were all prepared.

Our first game was scheduled for 8 at night, so we got to play at Drollinger field under the lights. We ended up having 12 on our roster which worked out well since only six to eight people can play in a game, and not everybody would be able to play every game. So eight of us arrived with our athletic clothes and cleats and checked in. We took a look at the field and came up with some more on the fly strategies. The team we played against in all honesty was really no match for us. We cruised to an 11-0 victory. But most importantly, I was glad to see that everyone was having a good time as I saw everyone encouraging and congratulating each other.

The next game we played was much closer. The game was tight whole time and we won narrowly 14-13 with and close finish. This one was a lot more intense, with some great throws diving catches. We have all improved greatly since our first game. We also went on to win our third game pretty handily, 11-0. and now we are sitting at the top of our division. We now really hope that we will go all the way (mostly because of the “Intramural Kickball Champions” t-shirts we would get). But in the end, all we are really concerned about is going out there and having a good time.

Raise Your Voice: How to Audition Your Way into an Arts Program
ASLMU President reflects on reasons to be #LMUThankful 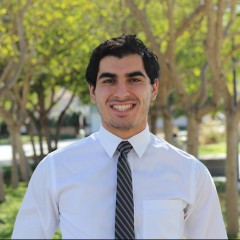 Steven Nassif '20
Hi! My name is Steven Nassif and I am a freshman from Santa Clarita, CA. I am an entrepreneurship major and I also plan on minoring in film. I chose to go to LMU because I love the city of Los Angeles and I wanted to stay local. My hobbies include spending time with friends, watching movies, listening to music, and playing sports. I am an extroverted person and am very passionate about what I love.