On June 9 I attended Freshman Orientation. I wasn’t sure what to expect — would everyone be friendly, or would our nerves get the best of us and no one would speak? I had no idea how many people would be there, or what vibe we all would be putting off. This was the first time I would be meeting some of my fellow students, so I felt pressure to be the best version of myself, nonstop, for two days. And when the time came to interact with everyone else…

I had a blast. The O’Leaders’ energetic personalities and instant welcoming just enveloped me the second I walked in, and I never felt like I was on my own in a sea of people I didn’t know. Immediately we went to Sacred Heart Chapel, where we introduced ourselves to the people around us, automatically earning each of the students a new friend right off the bat. And when it came time to separate from our parents and truly go on our own for the first time as college students, I never felt the gut-wrenching feeling of separation I normally felt when I would go to camp or spend the night at a friend’s house — I actually felt at home at LMU.

Of course, the initial awkwardness that accompanies all teenagers who have just been forced together at random was definitely there, almost visible in the air between us. But then the even more awkward icebreaker games to help us break down those walls began, and laughter eventually filled that silence. Immediate Facebook friending, Instagram following, and phone number exchanging ensued, and our group of unsure students soon became a family. Later that night, after ice cream, movies, and more, I found that I actually lived extremely close to my roommate for the weekend, and we had numerous mutual friends. With that, I had made yet another new friend at Orientation.

By the end of the second day, I was exhausted. As fun as it was to be in a social setting for 30 hours nonstop, I was definitely ready to fall back into a bubble of introversion where I could recharge. Driving away from LMU, though, I was sad to leave all of the new people I had met, and I couldn’t wait to talk to them again. Some of my group members and I actually continued to keep in touch and are still messaging each other a month later, and I am beyond excited to see them again in the fall.

But as alluring as returning to campus is, I am also holding onto this summer as much as I can, soaking in my friends, family, and home before I leave. I’ve been eager to start college since my sister left home for school four years ago, and now that the time is here, I’m ready. But there is still a part of me that wishes I could stay at home forever and have my parents tuck me in and take care of me (and let’s not forget the loveliness of having my own bathroom). But I know the time has come for me to go, and I am ecstatic that I have such a warm and welcoming place like LMU to go to once I leave. It will, of course, be hard in the beginning, but nevertheless, I cannot wait to call LMU my home. 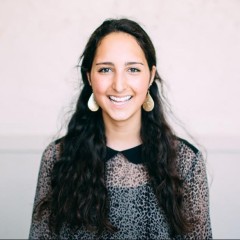 Eviania Santy ’18
Hello! My name is Eviania and I will soon be starting my second year at LMU in the fall! Growing up just ten miles from campus, I've always wanted to attend LMU, and I couldn't be more excited to start this next chapter in my life. I love anything and everything revolving around food (which isn't hard to believe, considering I am both Greek and Italian--two cultures with the BEST food), and I spend most of my free time at the beach. I can't wait for all of the activities and groups I can get involved in at school next year, especially Greek Life, choir, and Christian Life Community. I am so excited to share my first year at LMU with you!