Two weeks ago, I had the pleasure of attending a free live stand up comedy show that was hosted by LMU. The show took place in Burns Backcourt and featured comedian Chris D’Elia.

My girlfriend and I arrived about fifteen minutes late to the show because we were coming back from dinner. Side note, we went to this vegan restaurant called Sage Cafe and, much to my surprise, the food was actually quite good; you would never even know it was all vegan. We expected the auditorium to be packed. After all Chris D’Elia is a pretty big name in the comedy world, so I figured anyone who could catch a free show wouldn’t pass up the opportunity. We were pleasantly surprised to find a number of open chairs, and we still got pretty good seats despite our tardiness.

There was another comedian, whose name I never caught, that opened for Chris and he was hilarious! He was a middle-aged man with two kids in their early twenties so to hear him talk about the “younger generation” (our generation) from a Dad’s standpoint was very entertaining. It’s always interesting to hear other people’s perceptions of the generation and trends that you yourself are a part of. I was glad I caught the last 20-30 minutes of his act because it was some of the best comedy I’d heard in a long time.

Then Chris came on, dressed in the most casual outfit he could manage. He had a very laid back and relaxed demeanor. You could tell he enjoyed performing college crowds. He began the show very interactively. He was talking to people in the crowd, picking out things from people’s outfits that he found humor in. He kept picking on this one professor sitting toward the front, which definitely made for some good laughs. He also jokingly heckled people who walked in late, calling them rude and a few other things, which I probably shouldn’t repeat.

This was my favorite part of the show by far. I thought it was impressive that he was able to just go up on stage and mess with the audience, spontaneously coming up with jokes and using whatever audience members provided him to create humor. He was very good at it, and I couldn’t stop laughing for the first half hour or so of his act.

Once he got into his written material, I personally found it less funny than the spontaneous stuff at the beginning. The crowd loved it, everybody was roaring. He definitely still had some good content but it just wasn’t my favorite kind of humor and got old pretty quick for me.

Despite this disappointing final half hour, the event as a whole was still awesome. The opening act had my stomach hurting from laughter and Chris definitely showcased his ability to make anything funny when he went up on stage and spent a half hour just messing around and having fun with the crowd. And as a bonus, I was even able to get a picture with him afterwards. I will definitely add that one to the photo album!

I once again silently thanked LMU for hosting such an enjoyable event. It’s great that the school is at such a central location in Los Angeles. Since L.A. is such a hotspot for the entertainment industry, there are tons of great entertainers that live relatively close by and are happy to do a show for college students.

A surprisingly good vegan meal followed by a hilarious comedy show is a great night in my book! 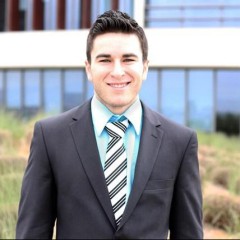