This year’s “Haunting of Hannon” took place in LMU’s Hannon Library on October 20-21.  This free event, co-sponsored by the Department of Theatre Arts and the William H. Hannon Library, helps to get students, families, and the general public in the Halloween spirit!

This was my first time attending this event, so I was pleasantly surprised to find such a fun and interactive experience. This year’s theme was “Murders in the Rue Bibliotheque” and vividly brought to life stories of mystery, imagination and the occult detectives and paranormal investigators from literature, including Agatha Christie’s Hercule Poirot and Sir Arthur Conan Doyle’s Sherlock Holmes. and featured many skilled student actors and actresses providing an interactive murder mystery experience.

Upon my arrival, I followed a series of signs to the library’s third floor where I was instructed to sign up for a tour time slot.  Once I signed up, I entered the Von der Ahe Family Suite and mingled with other students, ate Halloween themed refreshments and enjoyed part of a murder mystery movie as I waited for my name to be called with the next tour group.

Soon after, my name was called and I joined my group of ten students. Our guide led us through a maze of hallways, rooms and passageways in the library and throughout the tour, our group became part of a murder mystery! We encountered different scenes, characters, and eerie sights that we had to try and piece together. We witnessed a heated interrogation, grisly hospital scenes, a levitating girl, many ghostly figures, and more. The theatre arts students were exceptional at portraying their characters, whether villains or protagonists. I even recognized some of these actors as my classmates, which added to the fun of the event!

After the tour finished, we were free to go and roam the library halls – though we were advised to do so at our own risk. This event really helped to kick off the Halloween season for me and was a great addition to LMU’s line-up of fall festivities! 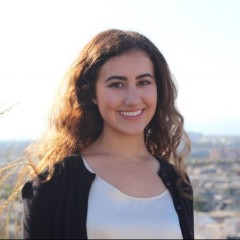 Natalie Lavacca '20
Hi! My name is Natalie Lavacca and I am a freshman music major with an emphasis on vocal performance. I first began vocal training at the age of 13 and have since developed a deep passion for the arts, in particular music, theatre, film, and creative writing. Thus far, LMU is the perfect outlet for my creativity and I am looking forward to my first performance! My life motto comes from a song in Rodger and Hammerstein’s Cinderella and goes a little something like this: “It’s possible!”