“In solitude a dialogue always arises, because even in solitude there are always two.”

Johannah “Hannah” Arendt, a German-born political theorist, made this assertion in one of her dialogues regarding isolation and its distinction from solitude. While an early 20th century German theorist and I may not share much in common besides our heritage, her description of solitude encapsulates what I have come to learn about the difference dividing loneliness and solitude.

Fundamentally speaking, solitude is defined as the state or situation of being alone, where loneliness is the state of sadness due to no friends or company.

While feelings of loneliness can manifest in situations of solitude, solitude in itself is the state of being alone and is not accompanied by any former feelings.

Periods of self-growth generally cause people to become hyperaware of their actions and effects beyond a singular level, especially in a secular world that promotes particular ideals about what it means to be a typical member of society. As one of many experiencing a growth period of self-development, one of the biggest concerns I have socially identified is the fear of being alone. While those with a greater understanding of solitude can look at being alone as a positive experience that enables one to relish in one’s company and inner self, general popular thought is that being alone is a negative state signifying rejection or a sense inadequacy.

A perfect example was my experience eating alone one day after work. In my last year of high school, I worked at a café, with a weekend shift that ended at 7:30 pm. As one could imagine, when my shift ended I would be famished, so naturally, I would find myself some food and head home. One day after work, I decided to walk across the street and dine in at my favorite sushi restaurant by myself in addition to the book I was currently reading because I simply wanted to be alone and eat some dinner. When I asked to be sat as one, the hostess asked if anyone was joining me, to which I replied no. Once seated, I began to read and waited for my food, and after about ten or so minutes, I was approached by an unassuming old man, who asked how I was doing and if I wanted to join him and his family’s table for dinner. Perplexed but genuinely touched by the stranger’s sentiment, I thanked him and replied I was “really okay!” enjoying my magazine. I never knew eating sushi and reading a book could look so dismal.

After this instance, I began to realize that people had mistaken my solitude for loneliness, thinking I was waiting for someone, when in reality, I wanted to spend some time with myself and enjoy a California roll and The White Oleander after a long day at work. I was not alone, but rather spending time with the person I am going to spend all my time with for the rest of my life: myself.

Taking myself on dates is one of the best ways I know how to keep in touch with my inner self and what I need, which generally is silence from the myriad of things going on in my life, exactly like the example above. Ranging from seeing a movie, or most recently, spending a day at the Aquarium of the Pacific last Tuesday, spending time in solitude grants me clarity thought as I can step away from the stress of everyday life to do something I genuinely enjoy, and then return with a more balanced mind and clearer vision. It isn’t to say I don’t have anyone to do these things with, but that I choose to do them alone as a way to self-reflect.

While my enlightened thought was strengthened by help of others (I must attribute it to Dr. Roy’s Spirituality class and How to Expand Love by his holiness, the Dali Lama), it gave me a different perspective on spending time alone. Previously, I did it to have some silence from my busy schedule, and silence from people asking me questions during a movie, but now I do so to deeply reflect on myself, a time I truly cherish. Doing so has helped me grow vastly in the way I conduct my activities and the way I prioritize my life.

To conclude, solitude is something we choose and grounds us in who we are; it paves way for an inner dialogue. It is positive, beneficial and something crucial to proper self-growth, regardless of how strange it may look to eat sushi or see a movie alone. While some may find being alone as a sign of loneliness, I see it as an opportunity. I encourage you to do the same.

And if you still think I’m weird for going to the aquarium alone, I got to pet a sting ray and didn’t have to wait in line. 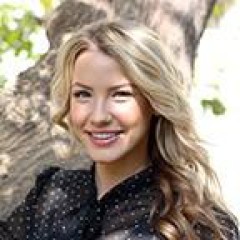 Samantha Larson ’16
Greetings! My name is Samantha Larson and I am currently a junior at LMU, focusing on earning my degree in communication studies with a minor in business administration. As a bay area native, coming to LMU three years ago was an exciting transition that has enabled me to follow what I’m passionate about, particularly studying public relations and marketing/advertisement. When I’m not studying, I love to spend my time watching critically-acclaimed films and shows (I am a keen Game of Thrones enthusiast), staying up to date on the world of cosmetics, and exploring the beautiful area surrounding LMU, including eating out at the various restaurants, attending concerts, and of course, going to the beach. In addition, I enjoy spending time doing philanthropic work with the Greek organizations on campus, as I am a member of Kappa Alpha Theta Women’s Fraternity and love to give back to the community while building rapport with others. Looking forward, I cannot wait to spend my second semester pursuing my passions and increasing my involvement on campus, and spend my summer traveling to Spetses, Greece through LMU’s Study Abroad program. All in all, being a Lion for the past three years has been nothing short of amazing, and I am excited to share my experiences as I continue on my journey at LMU!