I have always excelled in the math and sciences, which is why I chose to major in mechanical engineering at LMU.  I never thought attending law school would be something that would ever cross my mind. However, this past summer I began to ponder the future and started toying with the idea of pursuing a career in law. My mother is an attorney and was shocked to hear that I was considering such a career path. She, as well as many others, asked why I wanted to leave engineering, where I was sure to get a job due to the industry’s need for female mechanical engineers. I didn’t have an answer at first.  I just knew I wanted a change – and change can be hard, but also very rewarding.

Despite a few reservations, I took a big leap of faith in July and began preparing for the LSAT. I have a particular dislike for. standardized tests and the LSAT is no exception. Throughout college my schoolwork has consisted of engineering problems that take up three pages, but the material on the LSAT proved to be quite different… logic games, logical reasoning, and reading comprehension have not been apart of my everyday routine as an undergraduate. I was not used to having to develop persuasive arguments or having to find the main conclusion of a statement. Instead, I was used to having to use my mathematical and analytical reasoning skills to find one straightforward numerical answer. To my surprise, as I became more familiar with the LSAT material, I began to identify parallels with that of my analytical and logical reasoning problem solving skills. I began looking at logic games mathematically and started consistently completing what was once my worst section with 90-95% accuracy.

Keeping up with my studies while preparing to the take the October LSAT proved to be some of the most challenging months of my whole college experience. At the time I was taking 15 units, meeting with a tutor once a week, taking two 4-hour LSAT practice tests a week, and studying/reviewing practice tests for 2-3 hours on a daily basis when I wasn’t taking practice tests. Needless to say, I was stressed out of my mind.

I wish I could say that my nerves and stress levels were in check when test day arrived, but that simply was not the case. The week leading up to the LSAT I had my fair share of breakdowns and ended up getting sick as well. When I walked into the room that Saturday morning, I was ushered to sit in a small lecture hall desk. You know those lecture hall seats that have the writing surfaces that fold up and down?  Now picture being seated in one of those small desks for a six hour long test that requires you to simultaneously use both sides of a booklet that doesn’t fit on the desk. The nerves and anxiety of everyone in that room were through the roof and I instantly felt claustrophobic and defeated. To make matters worse, during the middle of the test I let fear overpower me and I decided to cancel my test scores. After the test I made my way to my car and called my mom in tears. I was devastated and felt that the months of hard work I had put in had been for nothing. I was ready to quit right then and there. I canceled my scores and was unsure if I wanted to take the LSAT again in December.

I thought perhaps I liked engineering enough and should just stick with that. I took two weeks off to evaluate my thoughts on continuing my preparation for the December LSAT. It turns out that time off was exactly what I needed. I began studying again in November and was much more confident and focused than before. To my surprise I was calm the week leading up to the December test and just ready to get it over with. I took the test at a college in Fullerton where a friend of mine had taken the October test because she told me that each student had their own table instead of a lecture hall desk. I left that test feeling like I had conquered the world and was extremely excited for it to be over.

I am so glad that I did not give up after feeling defeated by the October LSAT. Moreover, I am happy that I had the courage to pursue a nonlinear career, one that is not so black and white. So far I have been accepted and offered scholarships at three incredible law schools and am still waiting to hear from a few more. Not knowing where I will end up next year is both nerve-wracking and incredibly exciting! Although I will be leaving engineering behind, I know that the skills I developed while studying mechanical engineering have sufficiently prepared me for the challenges and rigor I will encounter in law school. 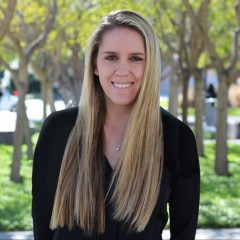 Katherine Rubschlager '17
Hi! My name is Katherine Rubschlager, and I am a senior here at LMU. I will be graduating this spring and will receive a B.S. in Mechanical Engineering. In my free time I like to run, read, go on adventures, and spend quality time with my friends and family. I am excited to share my experiences with you here during my last semester at LMU!