Unknown to much of the LMU community, the LAX Dunes are nestled in a residential area on Pershing Drive off Manchester Boulevard, adjacent to the blue waters of Dockweiler Beach. To most, they look as though a housing development was supposed to be built but never got off the ground. That assumption is correct. The city ended up scraping the project, opting to make the area a nature preserve instead.

Fast-forward to a warm Friday morning. Professor Trevor Zink’s Business and the Natural Environment class (myself included) were allowed onto the Dunes “to give back to the land” by helping clean it up. We were living out the course’s purpose, which is to learn about different environmental issues and find sustainable business solutions. A team from the Santa Monica Bay Foundation was our gracious supervisors for the day, providing us with gloves, tools, and even snacks. Aside from the peanut butter and chocolate chip energy bars, we received gardening tools to use for the day. Some opted for the more modest gardening hoe, but an adventurous few, like myself, chose the sickle to attack the invasive species that were hindering the native plants. Think of Indiana Jones’ machete in “Raiders of the Lost Ark,” except much tinier and used more for cutting out weeds than underwater combat. Nevertheless, it made the removal of the weeds a breeze.

The team had given us a broad scope of the plants and animals that thrive in the Dunes and those that were classified as “invasive.” The underdog of these native species is the El Segundo Blue Butterfly, which survives solely on buckwheat. The more we saved the buckwheat, the more the butterfly could flourish.

We filled a little less than a dozen bags with invasive species during our time volunteering. There are a lot of plants in the Dunes, though not all were easily identifiable. The enemy became the one that the 10 of us could easily identify – a particular type of weed with a red stem; removing it became our mission for the two and a half hours we were at the Dunes.

We also learned that many other environmentally-friendly companies volunteer their time, just as we had. For example, Patagonia, the popular clothing company, is next on the list for a volunteer day with the Santa Monica Bay Foundation and will even be closing their local store for the occasion. We had a great experience volunteering as a class and discovering that large businesses also take the time to help the environment in their community was an extra special takeaway.

What to Expect: Open House 2017
The Haunting of Hannon Library 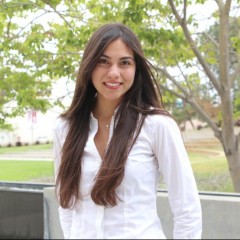