Loyola Marymount University’s commitment to a global imagination encourages all students to take part in a study abroad experience. For those whose finances and schedules can’t accommodate a full semester away from the bluff, LMU offers several alternatives, including BCLA Global Immersion courses. These on-campus, semester-long classes afford students the opportunity to explore a topic in-depth during a weeklong trip abroad.  Destinations change each year, but in the past students have ventured to Germany, Uruguay, Senegal, and Japan, among others.

This spring break I traveled to Northern Ireland with my upper division Theology class, taught by Professor David Sanchez. The class explores the struggle between Catholics and Protestants in Northern Ireland and the lasting impact their differences have had on the community. Professor Sanchez beautifully and strategically constructed this course through the perspective of visuals, as we were encouraged to envision the Troubles of Northern Ireland through art. His passion for Ireland and its culture exposed us to a series of thought provoking documentaries and images of murals during class at LMU, but it was our global immersions trip where we had the true ability to explore the issues we were studying up close in Belfast and Dublin. This was an amazing experience. It is one thing to learn from lectures and textbooks, but nothing compares to learning while completely immersed in another culture.  Speaking with people directly impacted by the Troubles face-to-face was invaluable. Belfast contains a rich history and each of its residents embodies their own rich history and culture. Walking through the city, our class could talk to a waiter or a taxi driver and each had a unique perspective on both their culture and the Troubles, and were more than willing to share their stories with us.

We also had the opportunity to attend mass at Clonard Monastery in Belfast. During the Troubles, Father Alex Reid conducted secret Peace Talks between John Hume and Gerry Adams at Clonard Monastery. It was surreal to walk the same halls in such a beautiful church with exquisite stained glass and detailed alters in stark comparison to the violence that engulfed Belfast during that period. Additionally, we had the opportunity to see murals along Falls Road including one depicting Bobby Sands, the first to perish in the second hunger strike in Long Kesh prison during a protest for unjust internment. He was on hunger strike for a total of 66 days before he died.

While on the trip, we spoke to former members of paramilitary groups, heard their motivation for fighting, and experienced the passion they had for their cause. I found it fascinating that throughout both cities, history is depicted through public art. Murals were scattered about in both Catholic and Protestant neighborhoods, memorializing each group’s heroes and martyrs. Through the display of public art, the turbulence of the Troubles stays in the hearts and minds of all those affected by it, yet also through the power of art and murals they move together towards establishing a more peaceful future. 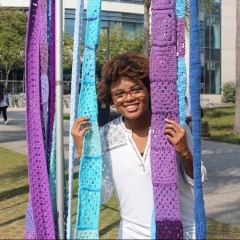 Mikayla Gingrey '21
Howdy, hello and hi! I’m Mikayla Gingrey and I am a junior screenwriting major (and double-minor in history and political science) here at LMU. I come from the great Pacific Northwest, the true home of Starbucks, and I am ecstatic to be able to share my experiences on the bluff with you! On campus, I am a member of the Belles service organization, Student Director of the Intercultural Facilitators and an R.A. (Resident Advisor) for Leavey Hall 4. Outside of class you can catch me playing Ultimate Frisbee on Sunken Garden, dancing my heart out in Zumba, or writing the next Oscar-winning screenplay at the Lion's Den, LMU's student-run coffeehouse.