When I started school five months ago, I was pretty uninformed about Greek Life, especially Greek Life here at LMU. When somebody mentioned the word fraternity, I imagined a bunch of meatheads in a big house drinking beer and sliding down banisters. This is what I had seen in movies and on television, and I had formed a stereotype around that. Therefore, entering LMU as an honors student who was very focused on grades and career development (don’t worry, I still am), fraternities were intentionally the last thing on my mind. In fact, I never even thought about it until about a month ago, when formal recruitment started. At first, I was very reluctant to attend any rush events because I had already decided that I wasn’t going to join a fraternity. After some encouragement from my girlfriend and close friends, I gave it a shot, and I’m sure glad I did.

During the two weeks of recruitment, I attended a multitude of rush events that facilitated meeting and conversing with active members. The events were generally casual, and usually consisted of a bunch of guys standing around waiting for potential members to approach them and start talking. As you can imagine, it was awkward at times, intimidating at times, and could get a little overwhelming, but was a great experience overall. I met as many fun and interesting guys during this time as I had met almost all of first semester. After being around them for a couple of days, the stereotype that I had built up in my head about fraternities was shattered. Of course, you can always find a guy that fits the ‘frat boy’ mold if you’re looking for him, and fraternities do throw parties, but I’ve mostly encountered young men who are hard working, driven, and part of an organization that stands for much bigger things than partying and working out. In addition, some of the most successful students and entrepreneurs that I had met and been told about when I first arrived turned out to be members of fraternities themselves. Naturally, I wanted in. And so, a little over two weeks ago, I joined Sigma Phi Epsilon, SigEp for short, and I could not be happier with my decision. I have now surrounded myself with a large group of like-minded people who act as motivators, resources, facilitators, and friends.

Not only do my brothers provide me with opportunities to have fun and enjoy all of the exciting things college has to offer, but they also provide me with a support system that I can draw from and fall back on when needed.

Both of these things are essential to having the best college experience possible, and I found them in my fraternity. Needless to say, I’m excited to see what my future with the fraternity holds.

Don’t get me wrong though, I’m not saying that Greek Life is for everyone. After all, until pretty recently, I was against it myself. A lot of people can find the things I have found in a fraternity elsewhere, and would prefer not to become a part of the Greek system. What I am saying, however, is that you should give it a chance. If you’re at all like me (and my parents) were, you might have already written it off. If so, I encourage you to look into it a little more. I know, at least for me at LMU, I’m thankful that I did. 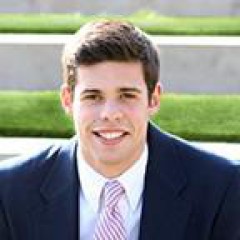 Samuel Walters ’18
Hey guys, my name is Sam Walters!  I'm a sophomore here at LMU, majoring in Entrepreneurship.   When I'm not studying or taking part in my pledging duties for Sigma Phi Epsilon fraternity, I enjoy playing intramural sports such as soccer and basketball.