Sponsored by Campus Ministry, First Year Retreat is a time to reflect on spirituality and get to know your fellow classmates better against the beautiful backdrop of Lake Arrowhead. During the two-day trip, you’ll play ice-breaker games and have the chance to share and learn about your peers and Group Leaders. At my retreat we had three speakers, ASLMU President LaShyra “Lash” Nolen, Nick Klein, and Anna Joyce. Lash spoke on how she persevered through life’s trials to reach college, Nick talked on how he survived the “sophomore slump”, and Anna spoke about how she got involved with Campus Ministry.

Reflection is a key part of retreat. During the evenings we would share reflective moments with peers. Some talked of painful past experiences endured, others of bad habits once held, lost loves, broken hearts, and so on… It was during these times of reflection that we would come up with kind words and wisdom for one another. It made me realize that no one is ever really alone – especially at LMU. Late at night everyone we would go stargazing and then gather to make smores. I made several great new friends on our stargazing walks, such as Emily, an animation major who plays bass guitar, Ryan, an undecided engineering major who loves cars, and Nick, a mechanical engineering major who loves to watch and make Youtube videos. The next morning, a mass was conducted and this was when I got involved with the Campus Ministry Choir conducted by Chris de Silva. While I didn’t know it at the time, First Year Retreat set up my freshman year. The retreat set me on a path to meet new friends, build my relationships with old ones, join the clubs I am currently a part of, and pursue my studies with zeal. It was the right way to start off my first year of college, and I would do it again if I could.

Study Spots For Success
The First to Go Scholar’s Program 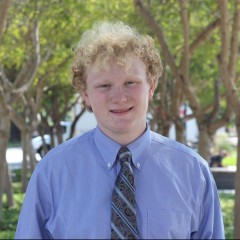 Jacob McCarthy '20
Hey! My name is Jacob and I’m a freshman mechanical engineering major from Monterey, Calif. Some of the campus clubs I’m involved with include Robotics Club, Animation Club, and the American Society of Mechanical Engineers – and one day I would like to start a campus club of my own! I also sing in the Campus Ministry Choir under the direction of our amazing conductor Chris de Silva. I look forward to sharing my LMU journey with you!