Going to college away from home is already hard, but being a first generation student can make it doubly difficult. My parents went to school back in El Salvador, and my mom was the only one who went to college, but you can’t really compare the level of education here to the one she received.

A college education was always something my parents hoped I would pursue, but they didn’t know too much about the process, so I sought out the resources myself. As a minority and first generation student, I’ve always known that I’d have to work twice as hard to get to where I want to be, which is why finding a support system in college is so essential.

Ranked as one of the top universities on the West coast, LMU’s pedigree can be pretty intimidating, but once I was actually on campus I realized it was an inclusive school held together by interconnected support systems. I was fortunate enough to have been accepted into the First to Go Scholars Program and everything began to fall into place.

The First To Go Scholars Program allows a select number of incoming freshmen who identify as first-generation college students take certain classes together during their first year in college, while building a community amongst themselves. There are a lot of ways you can benefit from the program, such as moving in early, having a mentor, and one-on-one check-ins every so often. My favorite memory so far has got to be the bonfire we had towards the end of fall semester.

Personally, my first year of college has been a rollercoaster ride. I’ve made some amazing memories but I’ve also gone through a few difficult times, but my first to go family was there through it all. Life isn’t always full of roses, and it’s always good to know that you have people you can count on to have your back when you fall.

This program has not only allowed me to build strong and genuine friendships but also helped me get accustomed to this new environment easier. The transition to higher education isn’t always smooth, but the First to Go program definitely made sure to remind us that we weren’t alone.

Being part of a community that values and understands the struggles we’re going through, really makes a difference. The First to Go program has been there for me academically, emotionally and personally, and I would not want it any other way. 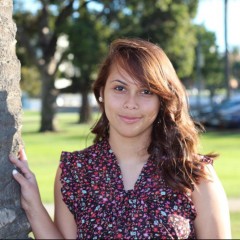 Victoria Arevalo '20
Hello! My name is Victoria Arevalo and I am currently a first-generation freshman communication studies major with a minor in journalism. I’m originally from El Salvador, but currently reside in Los Angeles, California. During my spare time, you can find me playing sports, or watching criminal TV shows. So far, LMU has surpassed all my expectations for college and I look forward to sharing my life as a lion for the next four years with you all!