During my sophomore year at LMU, I decided I wanted to direct a theatre piece with an all-female cast. I was searching for a play where women were portrayed in a different light, but was unsatisfied with my findings, until my mind harkened back to an old book from high school, Lord of the Flies — the story of a group school boys stranded on a deserted island, and fighting tooth and nail for survival.  It seemed like the perfect opportunity to subvert traditional roles of femininity and reveal the more primal instincts in all of us, regardless of gender.

I was lucky enough to have the chance to turn my vision into a reality through LMU’s student-run theatre troupe, the Del Rey Players. Each year, the Del Rey Players put on four different productions all completely orchestrated by students. After applying for and getting into the 2015/2016 season, the production was on well on its way…

In preparation for my directorial debut, I drew on much of what I learned while studying abroad last year in Germany through LMU’s Theatre program. I learned about a theatre style known as “epic theatre,” as proposed by Brecht, which focuses on alienation. The style was a response to the political climate in Germany during the 1920s. It incorporates breaking the fourth wall, using music and movement, and minimal props/scenery. As a whole, it is meant to inspire the audience to not only empathize with the characters but to think about the themes and motifs of the story.

As a result, my vision included a minimal set — sand symbolizing the beach, covering all the space available including some of the audience’s space, and using movement to represent fire. Additionally, each actor modeled their character after an animal in which they used to inform their movements, behavior and mode of speech.  And as each character became more savage-like, they slowly began to loose their human form, and embrace more of the animal within.

It was interesting to see how having females stand-in for the male characters changed the story. For the most part, the conflicts presented still rung true for the human condition regardless of gender. However, the girls responded more emotionally which does not mean they were not any less violent. Instead, as the story progressed, the character became less and less emotional and epithetical, until they were all blood thirsty and ready to commit murder under the rule of Jack.

Overall, I was fortunate enough to have a wonderful and committed cast and production team who brought my vision to life. Not too often are women the center of novels, films, and plays. After all, how often do you see female actors fight, howl, growl, and kill? Hard work, sweat, and blood were put into this production. I could not be more proud of the support my team has given me. This production, which debuted in February, would not be possible without the efforts of the cast, crew, designers, professors, and the Del Rey Players board – and I am thankful for each and every one of them.

Shooting for the Stars. Well, 3,000 feet, at least…
CPD Career Coaches Make a Difference on Campus 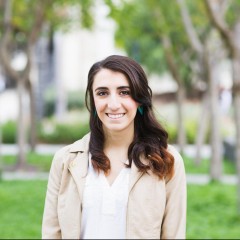 Parisa Loftis '17
Hello! My name is Parisa Loftis and a little fun fact is that my name means fairy in Farsi. As a San Jose, California native, I journeyed out to Los Angeles to pursue a career in Film and Television. As a Theatre Arts major with minors in Business and Studio Arts, I hope to combine my love for various art mediums to create works of art that focus on social justice issues. I am a very active member of the theatre community as a member of the student run production group, Del Rey Players, and a board member of the Theatre Honors Society. Outside of theatre, I am an active member of the Campus Ministry community as a Christian Life Community leader and retreat leader, and a member of the student public relations society. LMU has become my second home and I could not be more thankful for all the incredible opportunities it provides.